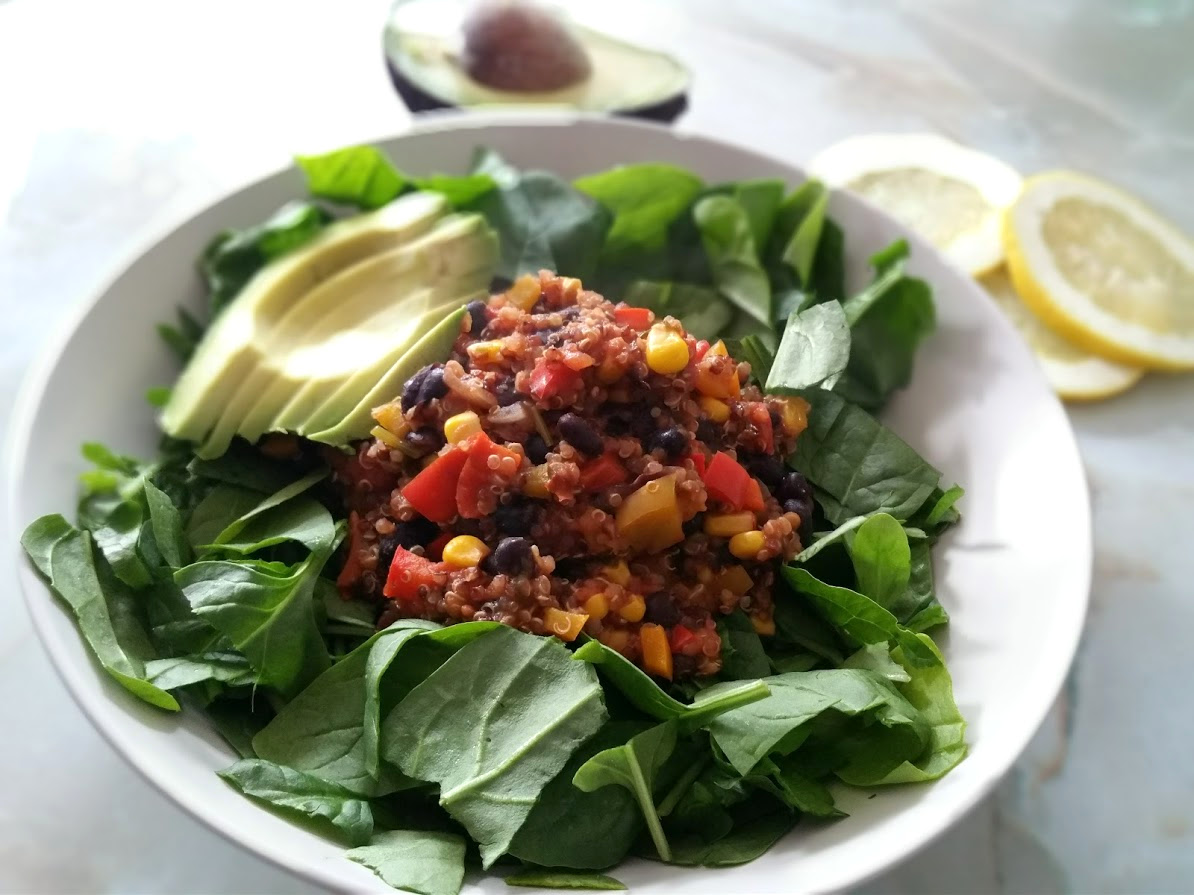 Some or other form of chili is a dish I regularly prepare in large quantities to keep in the fridge throughout the week. This quinoa and black bean chili is one of those dishes where you can take away and add ingredients as you please with whatever you have on hand at the moment.

The mixture of textures and flavours makes this a very satisfying Mexican-inspired meal and you can serve it one of many ways. One of my favourite ways to serve this chili is inside a baked sweet potato. Then you have the savoury taste of the chili combined with the sweetness of the sweet potato and caramel of the skin. The perfect combination in my opinion. Aside from that you can enjoy is more traditionally over a bowl of rice for a very hearty meal. Because it was a very hot evening when I prepared and photographed this bowl of goodness, I placed it on a bed of chopped spinach for a lighter meal.

When making this recipe, increase the amount of water or stock to obtain the consistency that you want. The same goes for the spices and tomatoes. These are simply guidelines, but everyone likes a little bit more or less of something. Taste and adjust as you go.

Have fun making it!

Versatile chili recipe to serve 4 - 6 people. Serve on baked sweet potato, a bed of greens or with rice. Top with avocado. 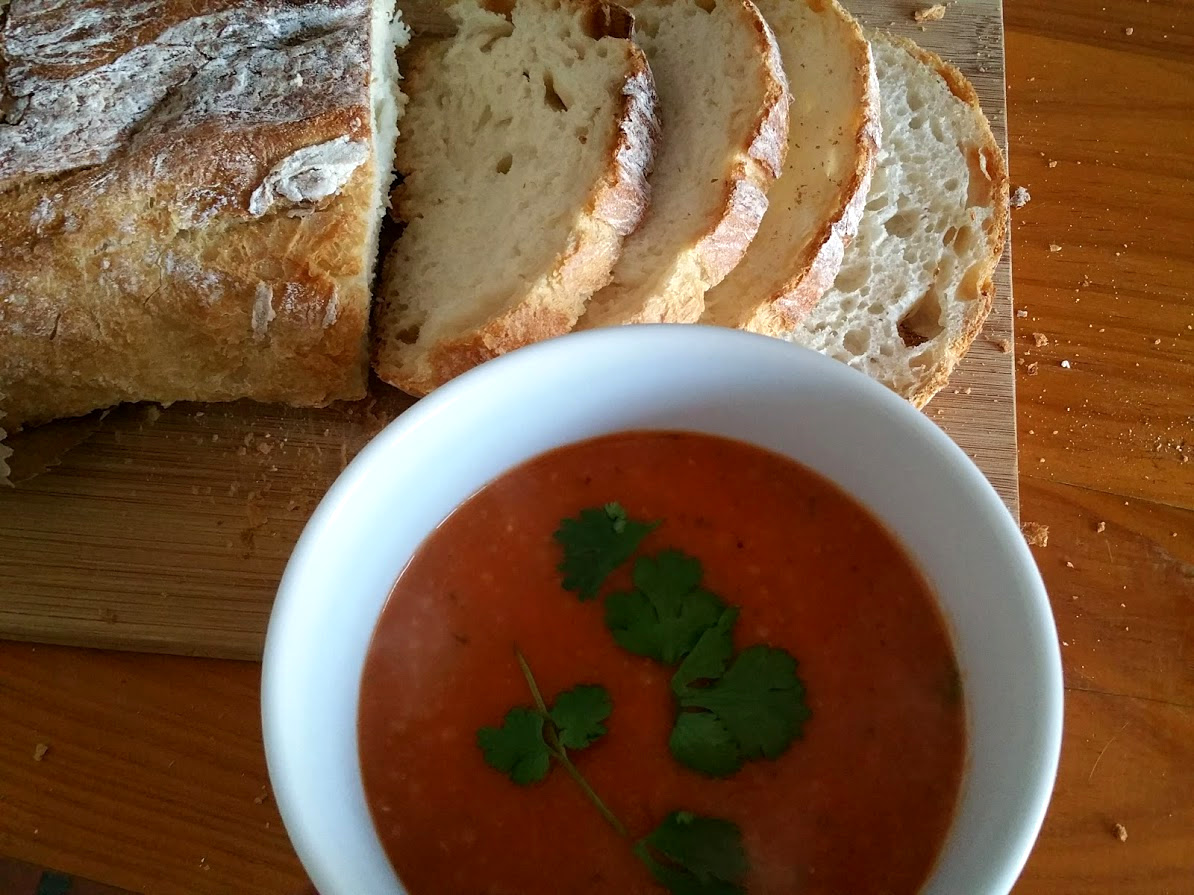 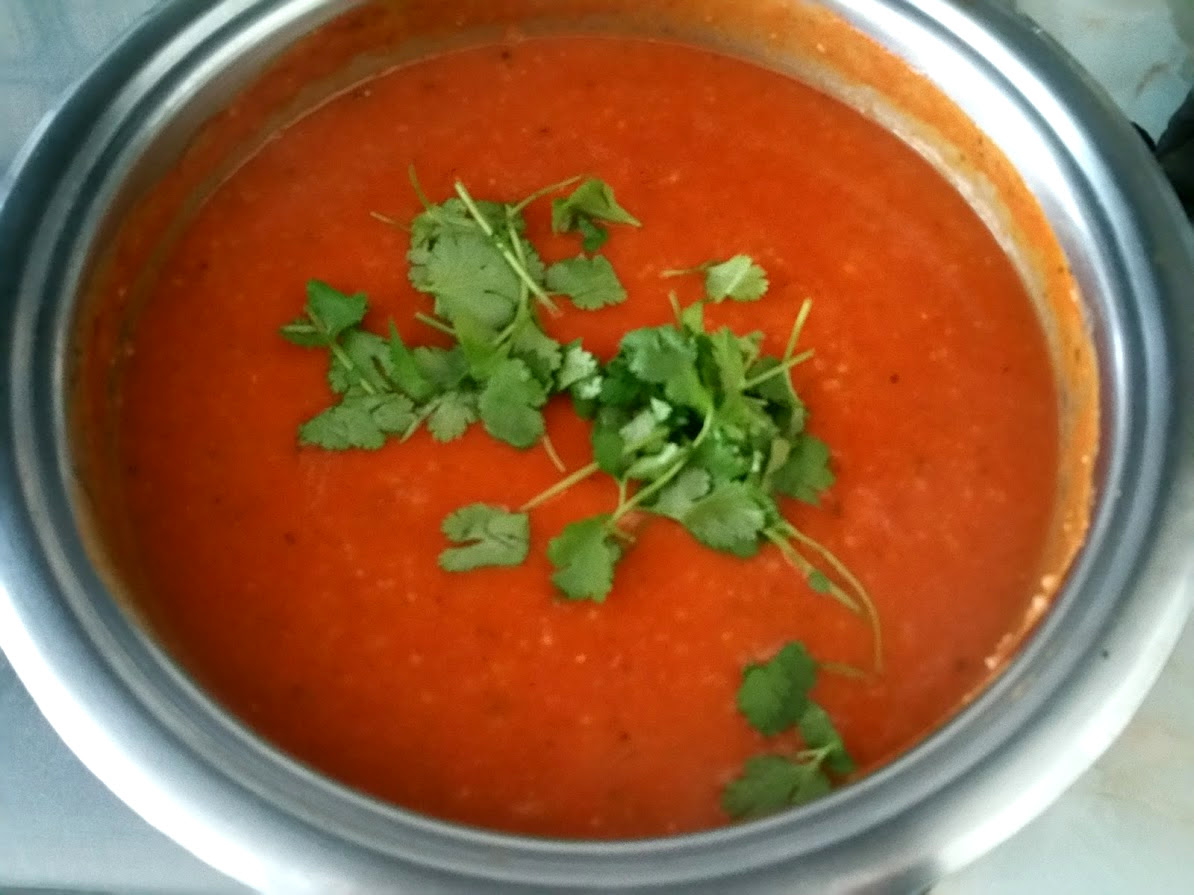 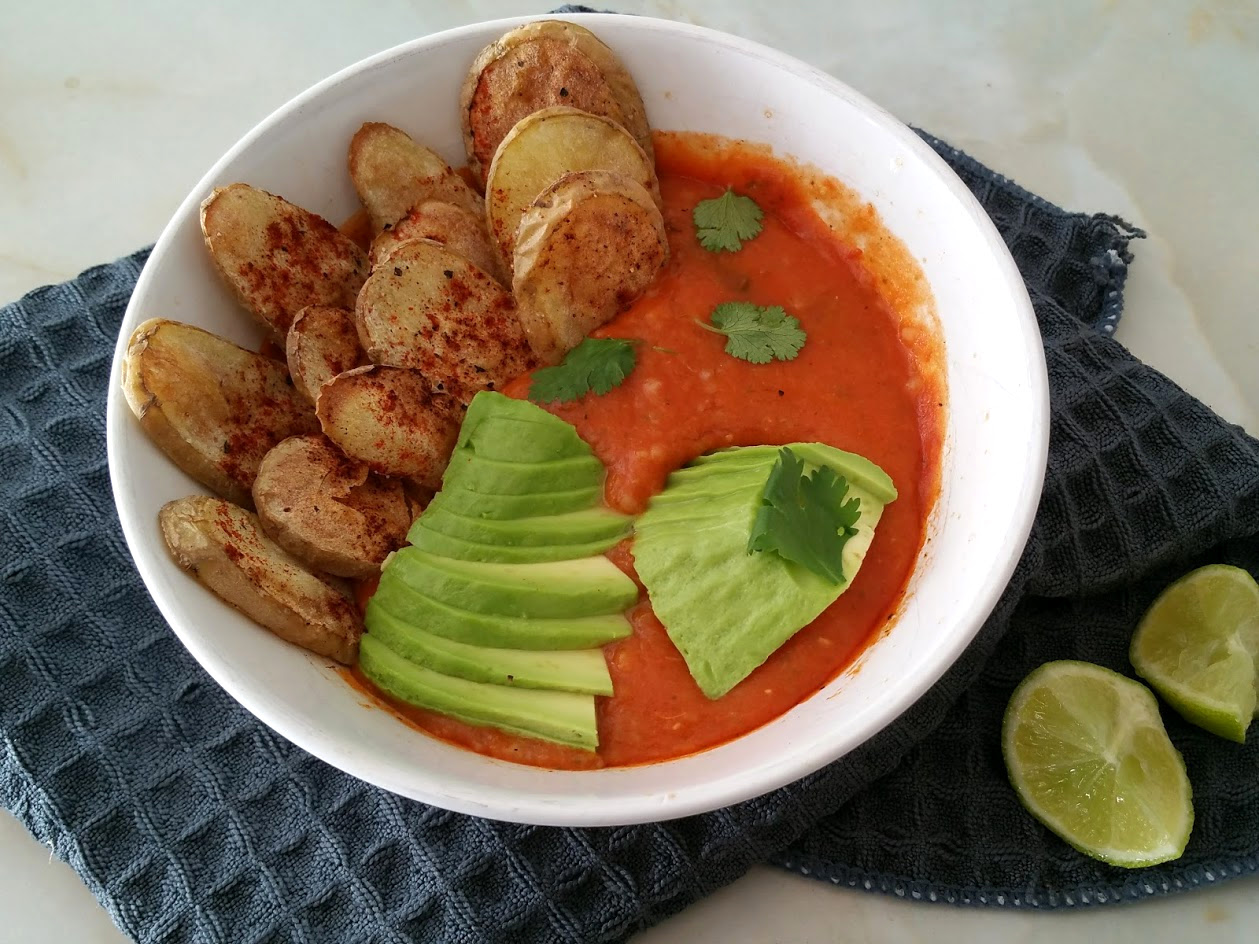 For a tomato soup, I don’t want a let-down watery business. I want a rich, creamy soup saturated with flavour. This Mexican tomato soup recipe gives you exactly that. I adapted it from a Jamie Oliver recipe to make it vegan friendly and more my taste.

This recipe calls for quite a lot of coriander. Many people do not like the taste of coriander (cilantro). I have grown to love it, but I remember when I was younger I hated when my mom used to scatter a few leaves over the rice that accompanied a main dish, but luckily that ship has sailed and now I love it! I do feel that this recipe would not be the same without the coriander because it is quite crucial for its Mexican twist. However, if you wish to remove the coriander, the soup will obviously go well with basil as it is tomato’s best friend – steering it into a more Italian inspired direction.

This recipe requires the use of roasted peppers which contribute to the richness of the soup. The creaminess comes from the blended potato, it works much better than rice in my opinion, although you can use white basmati rice if you prefer. If you do not want to use rice you could use potato as well. I think it will work just as well.

This Mexican tomato soup is best paired with avocado and lime to accentuate the tomato flavour. This soup is extremely rich which makes it quite versatile. It can just as easily be used as a dressing/sauce to other meal items. It works well served with rice, bread, nachos or with potato dippers (baked potato slices). I think you should be able to go as far as to use it as a pasta sauce. I haven’t tried it yet, but I think it could work. A Mexican pasta dish if you will… I should try it.

You can be sure that this recipe will not disappoint. Have fun making it! 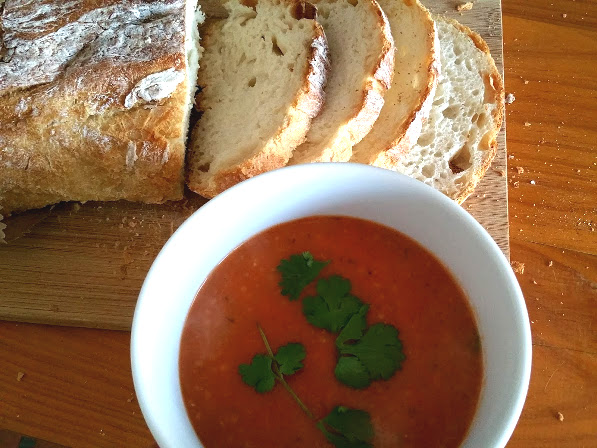 This recipe was adapted and veganised from a recipe by Jamie Oliver.

What Veganism Means to Me 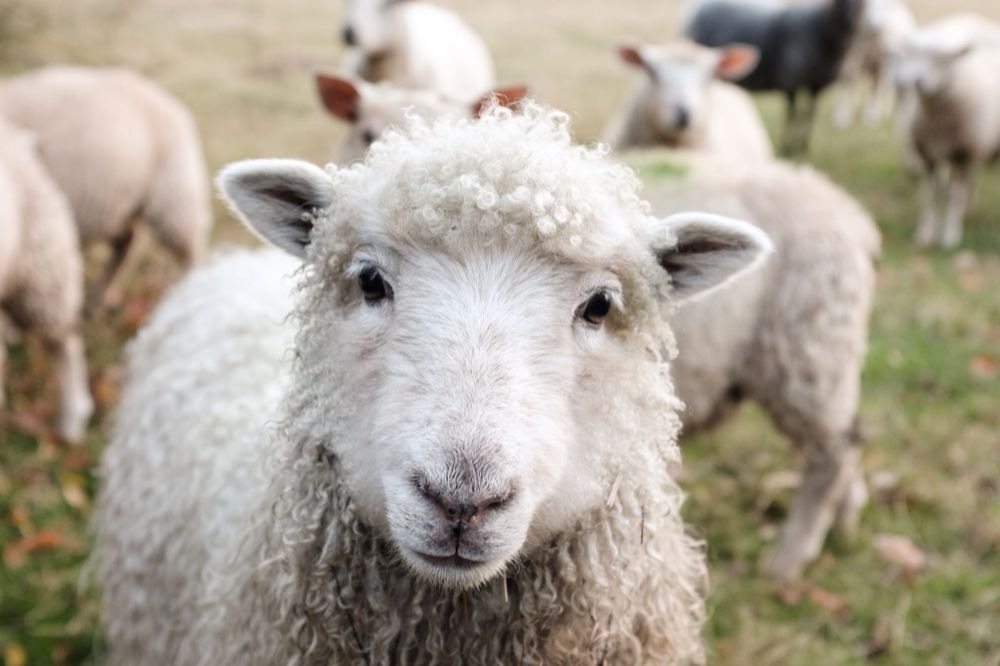 Veganism can mean something different to everyone. It is a massive umbrella term and beneath it you can find various subcategories like you would within a music genre. However, there are simple fundamental agreements that unite us as a group of people. My opinion might change over time, but in this post I would like to explain to you what veganism means to me at this very moment.

Veganism means not consuming animal products or any of their by-products. This means not eating animal flesh, honey, gelatin, animal secretions like milk, eggs etc. It means not wearing leather, wool or silk. It means not using cosmetic products that have animal ingredients. For cosmetics specifically I like to extend it to being cruelty free if possible, meaning that the specific product shouldn’t be tested on animals either.

There is no such thing as a perfect vegan

There is not such thing as being a perfect vegan. For example, once in a while you might come across a situation where you unknowingly consumed something that wasn’t vegan. This could be something like honey that sneaked into a salad dressing in a restaurant or something as simple as a person telling you the food they are offering you is vegan, but actually isn’t. And in my opinion, this should be regarded as being okay. It is not a mistake. Being vegan means that now that you DO know, you will not consume it again.

There are reasonable limits

There are reasonable limits to how much you are able to do. Or how much you are willing to do. And that is for you to choose, and you alone. Do what you are comfortable with doing. Leave other people alone and let them make their own decisions as to how far they would like to take it.

Veganism is about making conscious decisions on a day to day basis that reduce the harm done onto animals. No human can live on this planet and cause absolutely no harm to animals. A hard pill to swallow, I know.

When faced with situation where you are a vegan in a group of non-vegan individuals, I believe that it is your opportunity to show how easy it can be to be vegan and how happy it makes you and to kindly spread little bits of information. You should never underestimate the power of planting a seed. At the same time, you should also not underestimate the power of the backfire effect. Do not overwhelm people with gruesome information and facts, rather show them the delicious food you are eating. Share with them. Lead through example. Be the change.

Not being an asshole

Don’t be that asshole stereotypical vegan that makes non-vegans feel judged for their way of living. Who are you to judge anyone about anything anyways?

If you are asked a question about veganism, answer in a polite and informative manner. If you feel like the rest of the audience doesn’t want to hear about it, ask to continue the conversation at a later point in time.

When with other vegans, it’s about not calling other vegans out for “doing it wrong” because that is not a thing. If by the odd chance you see another vegan consuming something non-vegan, they probably do not realise it. Let them know in the kindest way when they are alone.

Being vegan to me means that you are trying your hardest to reduce the amount of harm that is caused to animals by the human way of living. Being compassionate towards the animals and our fellow humans. But whether you do what you do for the animals, for the planet, for the humans or for your health, just do what you can do. You don’t even have to put a label on it.

I leave you with my favourite quote:

“Don’t do nothing just because you can’t do everything.”